Experience raw, is the food of memoir, but it is raw. It needs the bloom and the layering of digestion-in-time to come to the light reformed. This is the nature of art and, really, painting. Art then, is the lens focusing the flow of energy as experience through a system. If experience is the food of art digested into objects, voluptuous cooking, words, theatre, painting and sound, so the experience of 21st Century Tokyo is a real shindig, a Thanksgiving bloat, a blowout feast for the spirit. In Japan it’s concentrated experience, worlds within worlds, like the nestling sections of a Bento Box. Everything is happening in well-defined containers. Tsukiji, the wholesale fish market in Tokyo is the most concentrated gathering place of nourishment the world has ever seen. A giant maw, the mouth of mouths swallowing 1/6 of the world’s ocean catch every day. The old market closed in the fall of 2018—a sad end to one of the world’s great spectacles. 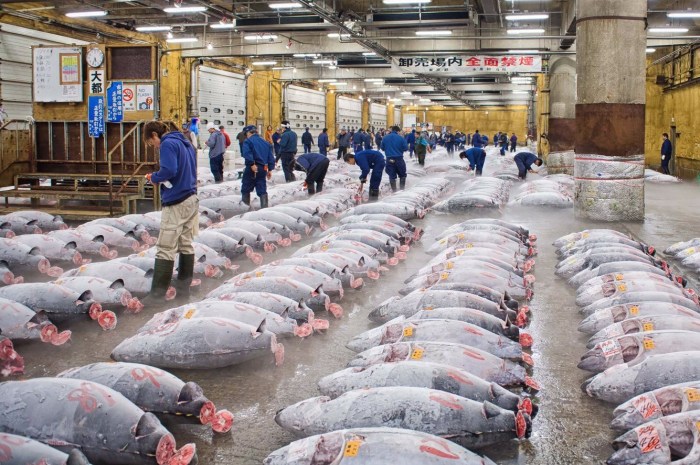 We visited in 2009, lucky us. First and always we see the tuna, giant torpedoes of red muscle cased in blue-black and silver scaleless skin. Sliver-moon tails cut off to show the levels of fat, old, Methuselah fish. Some are flash-frozen then displayed dead, white, headless and tailless, lumps, steaming with chill making a cloud of vapor that is lifting and falling slow motion in the bustle, a pale fog snugged low to the floor of the switching yard for these bodies. Some are whole, intact with the glazed eye, mouths agape; they are metallic shiny and are money itself, each fish fetching $$$$, 10’s of thousands and when sliced to sushi skyrocketing gouts of money. And as one progresses from the auction rooms out through the acres of maze one sees the slicing finer and finer to pure red blocks increasing the value exponentially. One just begins to see how, as the red goes to pink with more fat, the price logarithms through the roof. One can buy a trio of sushi lying on vinegared rice lumps going from red to rose to pink, a sampling of 3 levels of melt-in-the-mouth.

Tsukiji is huge. Built in a semi-circle, the space stretches into a disappearing haze, a fog of exhaust, dry-ice sublimating, steaming roadways… Where does it end?  This is a living hive of hard work. In recollection, glints from super sharp knives, flashing, slicing, trays of sea creatures laid out in fuss arrays, lovely Japanese care under blaring lights, and the hundreds of dangerous gas engined tricycle carts. You want to keep clear of these, trundling boxes of fish, ice and logs of headless tailless Bluefin Tuna. The carts are a standup apparatus driven, braked and stopped with a steering wheel mounted on something like an oil barrel, perforated with the roaring engine inside, atop the 360° wheel. The carrying cart is a flatbed about 4×7 feet. Drivers move their carts like buzzing bugs and the few tourists, a rarity with the 5AM call, stay well clear. The design is perfect for gliding between the displays of fish piled belly button high for inspection. The carts mean business and are a clear signal that we are interlopers, one wants to fade invisibly in the face of all that earnest industry. People are making a living here and we are in the way.

Big axes are the craftsman’s perfect tool for the expert job to hack the inedible away with deep skill turning that, fast-as-a-flash, top-line predator into pure lumps of high-grade nourishment and little waste. Eating a piece of this sushi put its energy into play, almost in an instant. Six-foot knives, sharp as samurai swords, slicing clean, geometric blocks separated to deep red and sandy pink.

There are fish in glass tanks and plastic boxes alive enough to prove their worth as living food. 20 foot long fish thrashing in a big green box looking and gulping for freedom only finding burning air. Tanks of shrimp swimming backwards on waving paddle legs motorized by that tube of flesh we love to eat. Legs under the tiger-stripped bodies moving in wave patterns. Glass tanks of the very valuable pufferfish, fugu, boxy and squat polkadot and primordial huddled in a corner together. These dark things will be transformed to flower petals of sashimi, expertly flayed by licensed specialists to avoid the choking death poison lodged in the gills. We are told it has little flavor but exquisite texture. There are restaurants that make it a specialty and they must be received live to insure freshness and safety. A culinary dare for some tourists. Here are big muscled crabs, bulky as body builders packed in damp sawdust moving slow as syrup. There are the fallen leaves of hand size silver fish laid out like the scales of the big carp in ordered shingles edged in black. There are sea cucumbers otherworldly and labile harvested for the roe dried which gets $400 a pound. Shellfish, quarter size clams and goeduck clams with white necks big as a horse penis and big football shaped of snappers in stark vermilion against all that silver and gray.

Everything is here to keep the place going: gas stations with nozzles made for the motor carts and hardware stores with the knives, axes, buckets, boots and gloves. The place kept humming with everything in one place. No quick trips to the store for a broken saw or grabbing hook mounted on hardwood that the workers all use like a third hand. Everything is here including the restaurants lined up one after another in four avenues just past the hardware stores. They feed lunch to the workers who’ve been at it, some of them at work since 4 AM.

Starving with thoughts of sushi for breakfast, we check two joints before we settle on our stools at the bar of Daiwa Sushi. We are travelling with Eli, my son, 21, at this writing. He’s looked around for just the right cafe. He knows this is a well-tested hangout for the pros who work here every day. He’s been living in Tokyo for a year so he knows the ropes. We duck in under the hanging curtain made to keep flies out and the customer bowing on entry.  It’s got black mullioned sliders and a black lacquer counter with the little window boxes to display the cuts of the day. Above the blocks of fish is a refrigerator pipe frosted with chill, keeping everything tip-top fresh.

Midway down the sushi bar the tank of live shrimp is quiet but for a random scout sent out from the pack huddled at the bottom. The emissary dances up on legs on the toes up to the surface and floats slowly back down to the group with nothing new to report. A live shrimp drawing back on its pillow of rice, is a fine thing to eat we are told. I order Uni, sea urchin, the roe really, a delicious pile of carmely nutty softness plumped over its collar of green-black seaweed. No wonder sea urchins have all those spikes protecting that morsel of compacted food energy, sweet and powerfully nourishing. We are eating great lolling tongues of red tuna, the biggest slices I’ve ever seen, and for breakfast at 7:30 AM. We try the light tuna, fatty and delicious, dissolving like foie gras. We are having a fine time once we’ve gotten over the shock of just finishing gorging on the experience of the market. We’ve been at it since 5 ourselves and are hungry and ready to gorge on the succession of treats laid on. Strips of red, orange, yellow or white, we scarf. The head chef with a smooth serious, intent face moving to smile creases — in an instant points to a piece of tuna in front of me and then to a picture on the wall of him standing next to a trophy tuna hung upside down. It’s so big, the giant sliver-moon tail three feet above his head. 520 kgs reads the sign sitting on the dock under the fish. “Old tuna,” he says in English and goes back to work.

The morning rush is on; all these mouths taking in, taking in. The giant mouth of Tuskiji a great whale swallowing every day, gulping in ton after ton of seafood to be transformed into the human work of the world. Tsukiji, a true node on the food chain, all that concentrated sunlight and carbon transfer. Powering the work of the world in transfer of fish meat to walking, thinking, driving a car, talking on the phone, walking to the subway, carrying a briefcase. All that fish meat, so fresh and much of it going direct to the mouth raw or lightly cooked, no tempering with freezing, breading, pre-cooking, none of it packaged in logo-wrap and some of it transformed into this typing, making these stories. All that giant market of fish meat digested in memory to make these stories.