Where the garden becomes a sculpture.

After days of muggy yellow skies, the night rain has washed the sky back to cool, dry blue. The fresh natural radiance pouring through the open doors glows on the glistening bronze and marble. At Rodin’s museum, made just for him, his forms writhe and twist, seemingly out of one body, out of the pith of creation. We see the coherence of one creator showing the power—the delight at having a body at all. Heroes like Balzac with his chest thrust up with sure animal energy paired with withered crone women, muse-ie, sexy girls a foil against the doomed Burghers of Calais. The body carries the weight of the soul’s feeling power. This is the magic of Rodin; that material can represent the pure rush of human feeling, not simply presence or heroic remembrance. Rodin brought back the vitality of Michelangelo through the sieve of the neoclassical revival. By mid-nineteenth century, sculpture had lost its power and had become simply a placeholder in the public square. The overworked super polished work of Rodin’s contemporaries had the look of corpses prepared for viewing. State-sanctioned sculpture had devolved into road signs—mere pointers in the landscape of human passion. 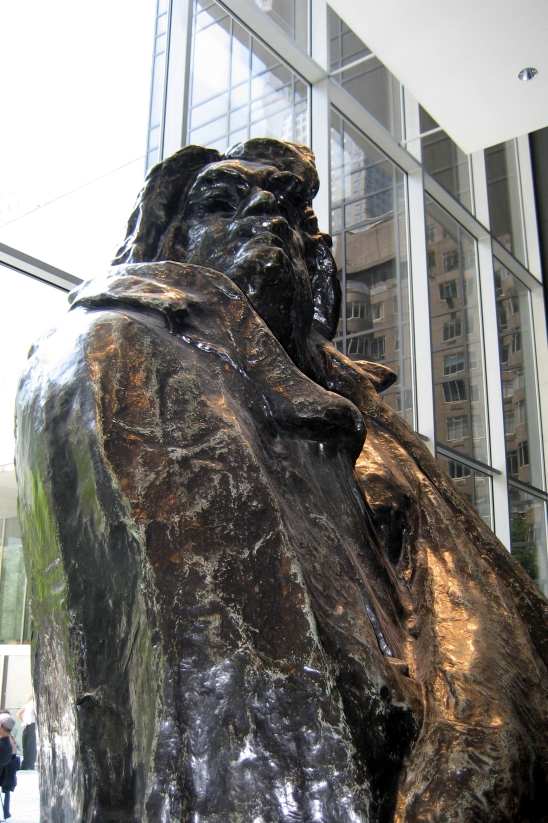 But Rodin, not a pointer toward something outside the body, was a realist in a somatic city where the body tells the story — the body we all live in, the body made, most likely, on the savanna lands of Africa. Rodin is saying we all come from one place, coming from one place at the beginning: The same place. The same family. As our family organized itself around the will to have a living touch with others, the will developed — the will to tell someone else about what it was like today.  The sculptures tell whole stories which in themselves contain whole stories, with Rodin revivifing sculpture as a teller of classical tales. And like classical tales shirking nothing. No horror in the book of passion was off-limits. Nor was Dante’s book of Inferno, where Ugolino devours his dead children; Francesca and Paolo are locked in their deadly kiss. All of these pieces were accomplished in a coherence of one dynamic vision. And then, in all of it, tenderness floats like a fine mist through the rooms. The shell ear of a crouching woman in white marble becomes a holographic pinpoint opening into the whole history of the human body. You feel that flesh itself grew into pre-existing forms; slip-clay poured into molds made on those savannas of Africa. 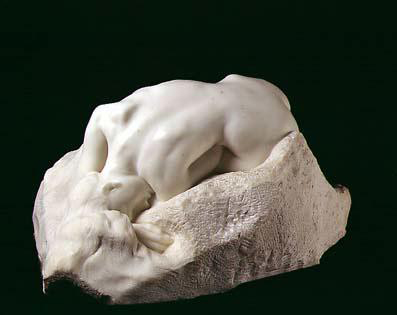 The question arises: what makes him modern? Is it his shimmering impressionistic surfaces? His use of repetition? These are formal concerns and they are “modern.” But, I think it may be his unflinching existentialism, his look at human existence as heroic in the most common gesture. I am here; I am here, in a post-Darwinian, post-Freudian, post-Einsteinian world. I am here. I am exalted, I am suffering. I am here.

When I came into the museum I made a point to test a hypothesis—that visitors seem to coalesce into a tribe of a certain pace of viewing. In the high summer season crowded with tourists, the pace of viewing sifts into the pace of certain others until, after visiting two or three rooms, you’re traveling in a loose group collated by the pace of viewing.  Legs on the same caterpillar, a special viewing party. This seems to happen most evidently in the small museums of Paris, built around the old studios of the great artists: Maillot, Rodin, Delacroix. They have a verticality, a depth, that the monster museums like the Louvre sweep away with the horizontal rush to see the whole picture. I love the intimate smaller galleries — the feeling of place and time and the vivid, energetic sense of a single creative soul. Of these, the Musée Rodin, with its formal gardens and the full sweep of a person’s career, is my favorite. 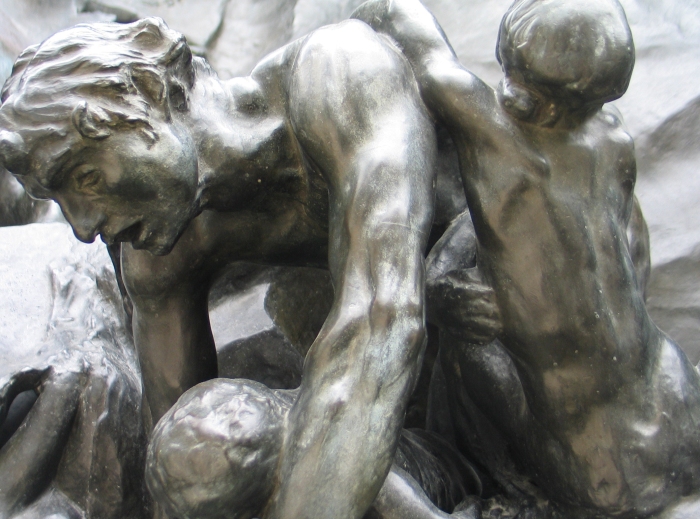 My theory seems to hold water. Our “party” includes a Portuguese couple. He’s in the military; at least it seems so by his haircut and build. They’re both with shiny new rings. It’s the five-day-honeymoon-leave-in-Paris, happily dreaming away the day with Rodin. One upstairs room has the outside double doors flung open to the clipped gardens receiving the air of this fine, bright day. With its iron railing for sitting, this French door makes a perfect frame for the honeymooner photo. In accented French they ask an open-faced woman to take the picture then hand her the camera. She hasn’t been in our group and is wearing a long coat. 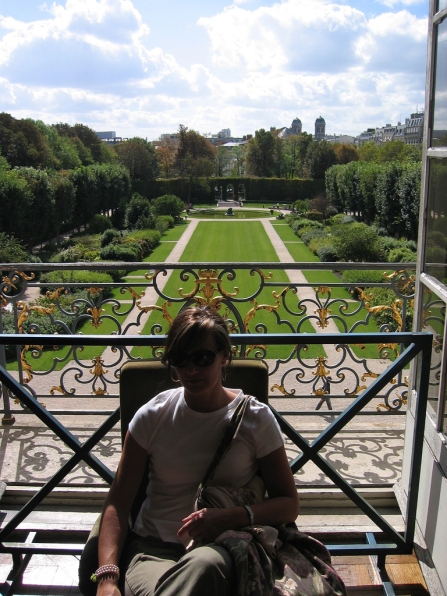 The couple position themselves and the woman moves out of the corner to frame the shot with the point-&-shoot. The honeymooner’s smiley-face they’ve put on changes to horror as they see the recruited photographer has a distressing, tormenting limp. Her twisted legs are barely on this side of standing let alone walking. She’d been in a wheelchair out of view, tucked into the corner, concealed by her friends. She’s just taking a break from the low-level view she’s accustomed to. There is a move to come to her aid. The groom starts to slide off his perch on the railing; the bride darting him a look, but time stops when he sees, we all see, the radiant look on the recruited photographer’s face. Finally, after years of being aided, she’d been asked to do a small service. Her look is filling the room. The private moment between the woman and the couple becomes a public moment as the bride and groom position, snap, flash, thank-you’s exchanged. It’s over. We all move from this micro-drama back to the main museum. Some of us who’ve seen a lot of the museum together, our aggregated platoon, exchange the shy smile of a shared intimate moment among strangers. The great art has set the stage but the unasked for drama says that feeling can be transferred; not the simple fact of sadness, exaltation, the wince of longing or the comic, but the sublime feeling of an open heart.